Archaeologists in Northeastern Spain found a stone slab that might contain a depiction of a Paleolithic campsite dated back 13000 years. The archaeologists suggest that this Paleolithic engraving is the first representation of a human social group.

The morphology, or shape, of this engraved schist slab was closely examined. It contains seven engraved semicircular motifs with internal lines arranged in two rows. Because of its shape and proportions, these motifs are interpreted as huts. 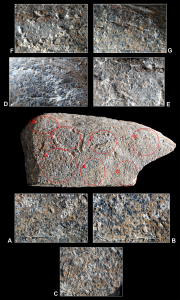 Microscopic and comparative analysis indicate that the seven motifs were engraved using a similar technique and instrument in a very short time. The discovery was made at the Molí del Salt site, dated to Upper Paleolithic, ca.  13,800 years ago.

(after Popular Archaeology & PLOS One)