Three hillforts in Central Poland were subject of non-invasive research by scientists from Institute of Archaeology of University of Łódź and Łódź branch of Scientific Association of Polish Archaeologists. The project “Non-invasive research of Early Medieval hillforts of Central Poland” is running since 2013 and during it’s course research on 12 sites have been conducted. The said forts studied in 2015 are dated to Early Medieval times and were located in the vicinity of the city Sieradz. This region was one of the principalities forming the historical, Łeczycka province of the Polish kingdom ruled by the Piast dynasty in 13th century.

The research in this season was conducted at the sites containing relics of three Early Medieval strongholds, Mnichów, Okopy and Witów. All three of them were erected in the times preceding the creation of the first Polish kingdom ruled by Mieszko I. As in former seasons of the ongoing project a wide array of non-invasive methods have been applied, among other geophysical prospection, geochemistry and aerial photography. The greatest advantage of such methods that they do not interfere with fragile archaeological sources underground. The geophysical methods, conducted by a team lead by Piotr Wroniecki, consisted of magnetic prospection as the basic technique of prospection and additional geoelectric measurements. Aerial photography was conducted by Wiesław Stępień. Geochemical studies, with a simplified phosphorous measuring technique was applied by Piotr Kittel. The leader of the project, Jerzy Sikora conducted extensive field surveys and integrated all of the obtained data in a GIS database.

In Witów, where the features of the site are not visible on the ground the integrated survey revealed anomalies in shape of a rampart measuring roughly 44.5 x 84.5 metres. It was also possible to locate a gate in the fortification’s east side. In Mnichów magnetic prospection revealed a gate, which couldn’t be located until now with conventional methods. The investigation of site in Okopy allowed to locate a bailey on the north-west side and not on the south side as it was earlier presumed. The results of the project are available at http://snap.uni.lodz.pl/grody/ 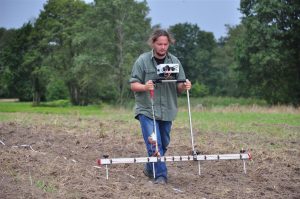