Archaeologists in Glasgow unearthed a 12th century Medieval fortified castle that was forgotten on overbuilt with industrial structures in the modern era. It was once built in an area given to Glasgow Cathedral by King David. Until now it was thought to have been lost beneath centuries of industrial area of an engine works, an industrial laundry, the old Partick Central Railway Station, a metal scrapyard and a foundry variously that occupied the site during the 19th and 20th centuries.

Govan, on the opposite south of the Clyde, was a medieval ecclesiastical centre and a seat of the Bishop of Glasgow. A spot of slightly higher ground in the west of the site became the focus of attention for Beth Spence, of GUARD Archaeology, and her team, dating its finds to periods between the 12th and 17th centuries. These fits the historical references to the original Bishop’s residence being erected no earlier than the 12th century and demolished in the early 17th century.

The encountered remains are probably ruins of both the castle and later residencies, such as a tower house. Partick Castle was built near the confluence of the rivers Clyde and Kelvin as a retreat for the hierarchy of the Diocese of Glasgow, which was established in 1115 and occupied the castle until the Reformation in the 1560s. 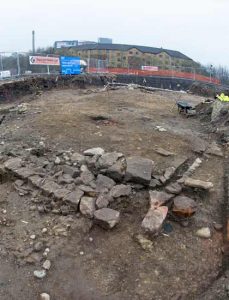 The survival of these medieval remains is especially remarkable given that the site, not unlike many industrial river banks across Britain, has witnessed such large-scale destructive development over the centuries.