Archaeologists conducting excavations at Lima’s ZOO discovered remains of over 100 dogs and humans dating back to pre-Columbian times.  Some of the dogs were mummified with skin and hair still preserved.

Over the course of excavations, the team lead by Karina Venegas Gutiérrez unearthed the skulls of 126 humans and 128 dogs. Some of the humans and dogs were wrapped in textiles. The ceramics and other artefacts found by the remains suggests the bodies were buried around 10000 AD. What makes this discovery exceptional is that human and canine remains seem to be randomly buried in the same area and at the same time. Normally, canine burials are found separately to human ones, or dogs are found within human burials – as pre-Columbian Peruvian cultures believed that dogs provided escort to the afterlife. 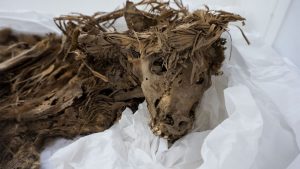 The human skeletons represent both men and women, between 20-40 years at the time of death. Many show signs of violent injuries, including skull fractures, cracked ribs or broken ribs without no signs of healing – indicating possible causes of death. On the other hand, canine skeletons show no signs of fatal wounds, although they probably might have been strangled. All these evidence indicate that the dogs were part of a ritual sacrifice to the humans after a mass death. The archaeologists still are unable to determine why the people were killed and by whom. The burials are contemporary to a transitional time for Peru’s coastal societies dated 300-800 AD, when the Lima culture people built temples and communal spaces from narrow adobe bricks, which were abandoned around 1000 AD as people of Ychsma culture moved in tearing down earlier buildings and reusing bricks for own constructions.