Skip to content
A secret chamber used for eavesdropping on enemies in the 16th century was discovered in the  Lyubyanka district of Moscow, Russia, by archaeologists working at the renovation project of the capital.
Archaeologists found a small vaulted chamber in a trench dug near the St John Church, which is located about 700 metres away from the Kremlin. According to the experts this chamber had helped Moscow’s defenders to spy on enemies on the other side of the city’s Kitaygorod Wall. The Kitaygorod Wall was built in the first half of the 16th century to protect the city from raids from Crimean Tatars. The wall once stretched over 2.5 kilometres and featured 12 towers, but only small fragments have survived to the modern day. During excavations in the Lubyanka and Novaya Ploshchad area more than 150 artefacts dating back to the 16th-19th centuries were unearthed during the renovation. Among them are coins, ceramics, utensils, bullets, buttons, an arrowhead and a cannon ball. 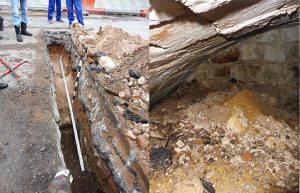