During construction of the ring road around Kłodzko a trace of the settlement has been found. Excavations that were conducted as part of the standard procedure preceding the construction revealed that a settlement dated even back to the 9th century BC along the road’s planned course.

The excavations revealed remains of two settlements, one connected to the Iron Age Przeworsk culture (3rd cent BC -4th cent. AD) and a second, much older one, dated back to 9th century BC, associated with the Lusatian culture. 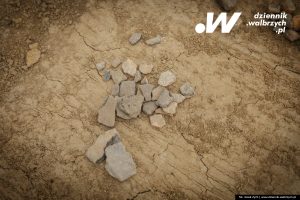 The settlement of the Przeworska culture people was densely populated and contained houses built with use of pillars, which left their marks in the ground. It was an open settlement of people thriving from agriculture. The excavations revealed numerous small finds, such as shards of pottery vessels and iron fittings of farming tools. All artefacts will undergo conservation and will be deposited in a museum in Kłodzko.