A Roman Imperial winery was found by archaeologists near the village of Vagnari in the Basentello river valley, Southern Italy. Fieldwork and survey by Canadian and British universities have gathered evidence that this area was transformed in the early first century AD into imperial landholdings. Excavations of the University of Sheffield revealed a settlement on the Roman imperial estate at Vagnari. A large stone-built complex of the second century AD comprising a series of rooms which opened onto a wine fermentation and storage room. In this area, large circular plastered basins had been inserted into a thick mortar paving.

Each basin held a pitch-lined ceramic container with a rim diameter of over 0,5 m and a body diameter larger than 1 m.  Vagnari was the economic and administrative core of the estate. Very surprisingly, one of the containers  contained two human skeletons. Evidence for a wide range of specialist crafts and industries was revealed, including iron-working, lead processing, and the production of roof tiles and ceramics. 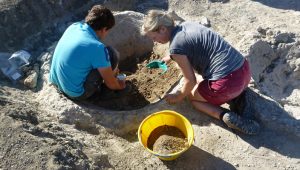 Such “wine cellars” are known on private farms elsewhere in Roman Italy and the Mediterranean, but at Vagnari the wine came from vineyards belonging to the empire’s greatest landowner.